There was until recently a bright orange 1969 Porsche Targa in Swiss bodyshop René Sahli. The classic car had come in to have a small patch of rust repaired, but as it turned out, a full-blown restoration was required. For the re-spray, Sahli relied on the experience and products of Wuppertal refinish brand Standox.

“I have always loved working on classic cars,” Sahli says.

For René Sahli, who runs the business, refinishing is in the blood. “I have always loved working on classic cars,” he says. “My father restored a large number of classic cars and so taught me how to do it.” For the last seven years Sahli has been in charge of the business his father founded in Aesch, Switzerland, in 1976. With its four employees, the René Sahli bodyshop has an outstanding reputation among classic car owners in the local area. Its expertise in restoration becomes apparent as soon as you look at the bodyshop’s website. The image gallery is full with exclusive classic cars that have been given a new lease of life, and they include quite a number of special Porsches.

The Targa required a complete overhaul

Word of mouth brought the owners of the 1969 911E Targa to Aesch. “He had noticed a patch of rust on the car body that he wanted us to repair,” Sahli recalls. Rust is not unusual for vehicles of that age, as cavity sealing or galvanising were still largely unknown then. But when Sahli examined the classic a little more closely, he quickly discovered more rust.

“The door sills in particular were in a pretty bad state. Spot repair on a sports convertible that was almost half a century old was simply not going to do the trick,” he says.

The longer the investigation took, the more obvious it became that the Targa required a full-blown restoration including a complete respray. A perfect job for the classic car specialists at René Sahli.

Because of the extent of the rust, Sahli took a radical approach to remove the old paintwork. To carry out the restoration, he removed the bumpers, fenders, and front and rear hoods and sent them to a specialist company in Stuttgart, Germany.

There, every part was stripped in a dip tank, had the rust removed in an acid bath. They were then primed using a cathodic process.

“These processes were the only way to ensure that every single part and every cavity would be reached,” Sahli explains. “It’s simply not possible to achieve that using traditional paint stripping and spray priming methods. However, the complex procedure revealed that some of the add-on parts including the front hood were just not salvageable. They had to be replaced using original Porsche parts.”

Sahli had access to original Porsche colour samples from the period that he was able to use for the restoration but he still used the Genius spectrophotometer from Standox. “Just like today, back then factory paint jobs were not always the same. There can be visible differences even if the name of the colour is the same, and some colours changed in the course of production,” he says.

Sahli explains another important factor he had to consider. “Car paints in the past used pigments that contained lead. They provided greater coverage but that meant more colour deviations compared to modern paint. Pigmentation also plays a role in metamerism.

Depending on the light source, individual sections of the colour spectrum can be reflected differently due to a change in pigmentation. This can lead to another perception of colour under varying light sources.
That is why it is important to ensure that the repainted and the original colours behave in a similar way. For these reasons, I used the modern spectrophotometer because, together with the Standowin iQ software and the good colour database, they simply deliver the best results.”

The Targa was originally painted with Signal Orange, a warm, radiant colour that looks perfect on convertibles in the sunshine. 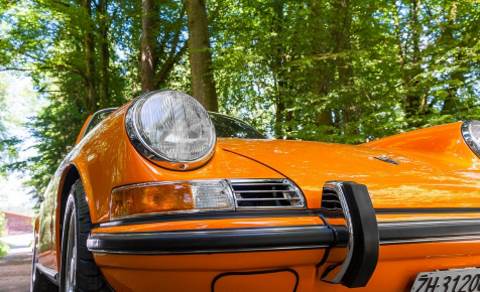 Porsche used this bright orange from the late 1960s on the 911 and on the so-called people’s Porsche, the 914.

The Porsche in all its new glory

Sahli took readings of the original colour with the new Genius iQ spectrophotometer and took advantage of its modern features, such as WiFi connectivity. To recreate the right colour, he sought additional support from the technicians at Standox distributor for Switzerland, André Koch AG in Urdorf near Zurich. Even for unusual requests such as these, Standox is able to count on its extensive coloristic knowledge that it has built up over many years of close collaboration with the majority of car manufacturers.

Sahli finally mixed the Signal Orange colour with Standox 2K paints and refinished all the vehicle parts. After the restoration, the bodywork of the Porsche has reclaimed its original splendour.

Sahli and his team also undertook the labour-intensive reassembly of the car. “I have very high standards when it comes to the quality of our work, so we prefer to do as much as possible in house,” he says. “But this type of work is also a lot of fun. What is so great about classic cars is also that their technology is relatively straightforward compared to today’s models.”

After the assembly and the final touches, carried out with a wax polish, the project was finally completed around a year after the first inspection.

“The customer was delighted with the result. But we had to hurry so that he could still enjoy his Targa in the summer,” he says.

Standox has a long-standing good reputation for the restoration of classic cars. The premium brand from Wuppertal covers the topic of Classic Cars in its Standothek series of manuals under the title Prestige and Classic Cars, available for download at www.standox.com/standothek. Further information on the René Sahli bodyshop is available at www.autolackprofis.ch.

Facts about the Porsche 911